Working as a studio musician has given me an insight into a variety of different recording methods. No two recording sessions are alike. For a good recording, you need creativeness and stubbornness.

Back in 2003, the band was formed. We were ten kids from the south of Sweden. Inspired by the traditional music of former Yugoslavia, we put together a brass band, played at every wedding we could find, moved on to clubs and festivals, travelled to Serbia for inspiration and education, and finally started a nightclub. Over 300 gigs and several legendary parties later, we took it one step further by presenting Discoteka Yugostyle.

Bringing together an intense 10 man strong live act, one part Yugoslavian wedding, one part yugo trance disco beats with DJ-ing, drum machines, synthesizers, visual arts and tacky decorations, this was not just a band; it was the ultimate party machine.

I have freelanced in all three professional military orchestras in Sweden. Mainly working in The Mounted Band of the Royal Guards, participating in various repertoire and parts. From 2nd Bb-bass at ceremonies to principal tuba in a Wagner concert programme. 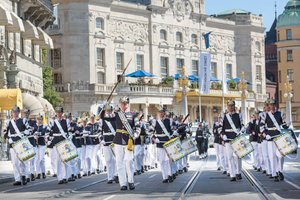 Throughout the years, I have worked and freelanced on several projects. From small singer/songwriter projects to film music and concert productions.

Icons made by Freepik from flaticon.com and is licensed by CC 3.0 BY